NHRM were delighted last Summer to be contacted by the BBC’s location team who wanted to film part of their historic travel documentary, the brilliantly entertaining Great British Railway Journeys with the very engaging and charming series host, Michale Portilllo.

Michael Portillo is in Suffolk on the last leg of his 1930s Bradshaw’s inspired tour of East Anglia. He begins at the home of British horseracing, The National Horseracing Museum in Newmarket, where he learns of the interwar success of a jockey-turned trainer and helps to care for a famous ex-racehorse. 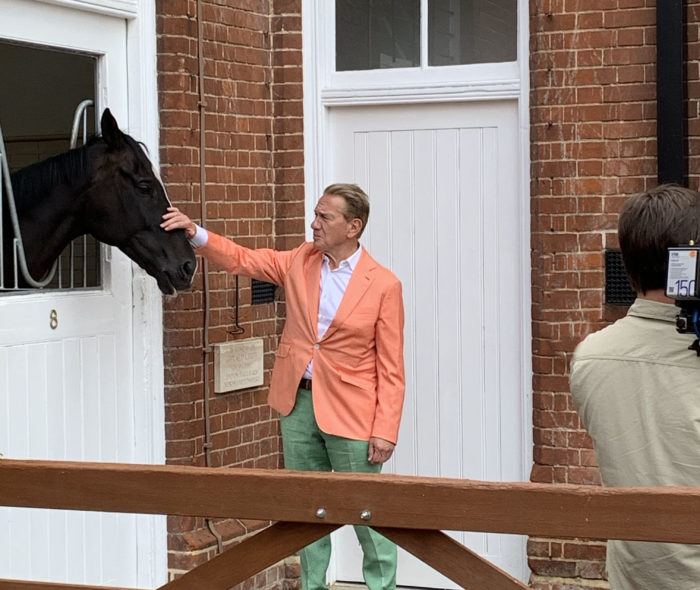 The filming covered The Rothschild Yard at NHRM, where Michael met the horses, chatted to our Yard Manage, Sue Molloy about work of the RoR, he also walked around the whole site, it was great to see the whole production crew here and they also stopped for lunch in the TackRoom Restuarant too.

At Ickworth House near Bury St Edmunds, Michael gets a taste of life below stairs during the 1930s and is put to work preparing a ‘plum betty’. With a taste for sweetness, Michael takes the train to Downham Market to explore how sugar began to be refined from sugar beet at Wissington in 1925.

Back on the Fen Line, Michael is bound for King’s Lynn and Wells-next-the-Sea, where he boards the exceptionally narrow-gauge Wells and Walsingham light railway. Arriving in Walsingham, Michael discovers that until Henry VIII’s Reformation, this small village was one of the great Roman Catholic shrines. During the 1920s and 30s, there was a revival in pilgrimage to Walsingham, and a new Anglican shrine to the Virgin Mary was built.

The BBC screening is series 12 of the programmae and is aired on Fri 7 May 2021 at 18:30, but you can catch it anytime after then, on the BBC iPlayer

If you’re looking for an amazing location to film or shoot in, please drop us a line at this email address to further your enquiry.

The Wow, The Weird and The Wonderful

Her Majesty The Queen has become the first British Monarch [...]