Ginger Rogers Has Been Brought In

‘The Barkleys of Broadway’ was the final film that Fred Astaire and Ginger Rogers made together. The film was meant to star Judy Garland, however she fell ill and was unable to continue with production. Ginger Rogers starred in Hollywood musicals from the 1930s. The partnership of ‘Fred and Ginger’ was one of the best known in film history. Over the span of seventeen years, they starred in ten productions, including ‘Swing Time’. Actor, Katharine Hepburn, said of their relationship, “He gave her class and she gave him sex appeal.” 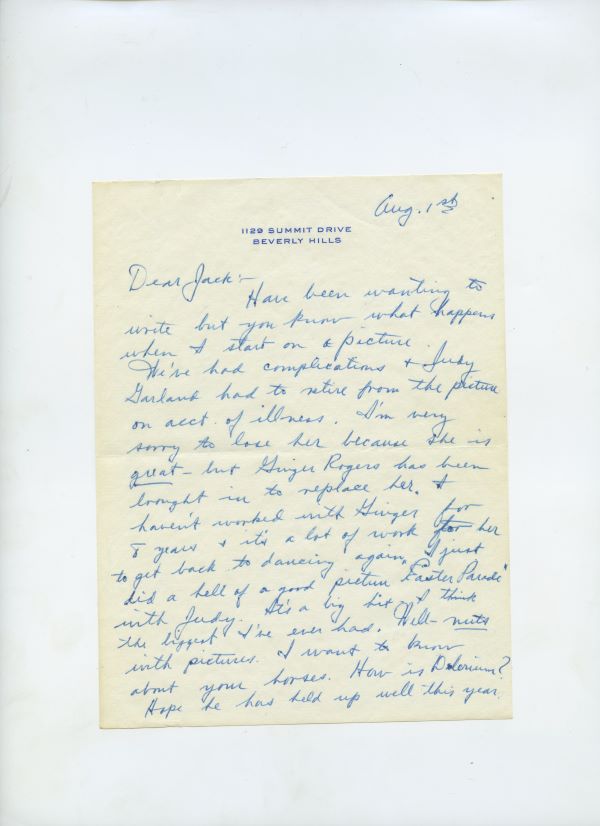 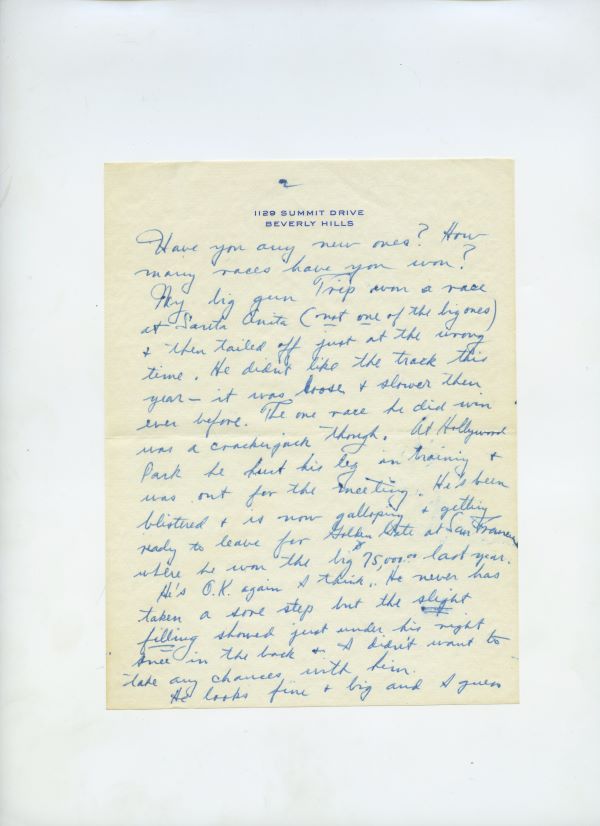 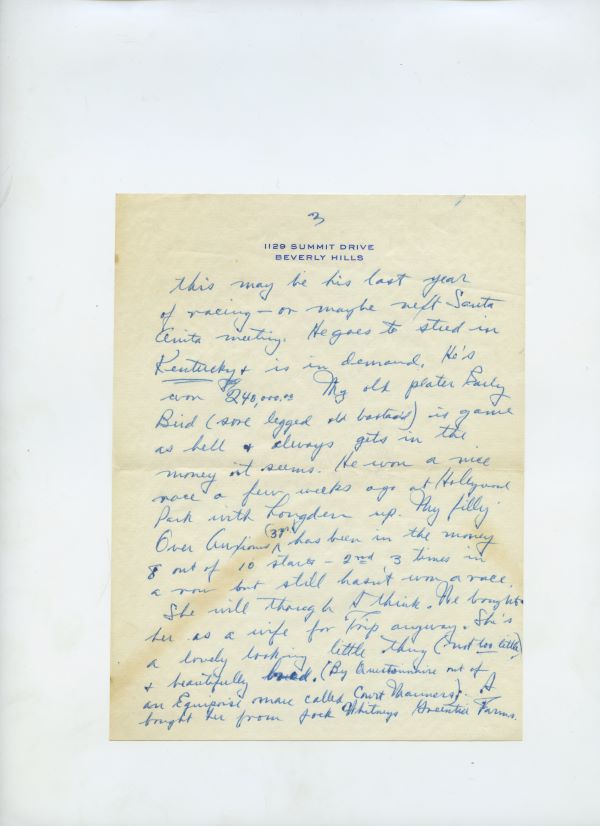 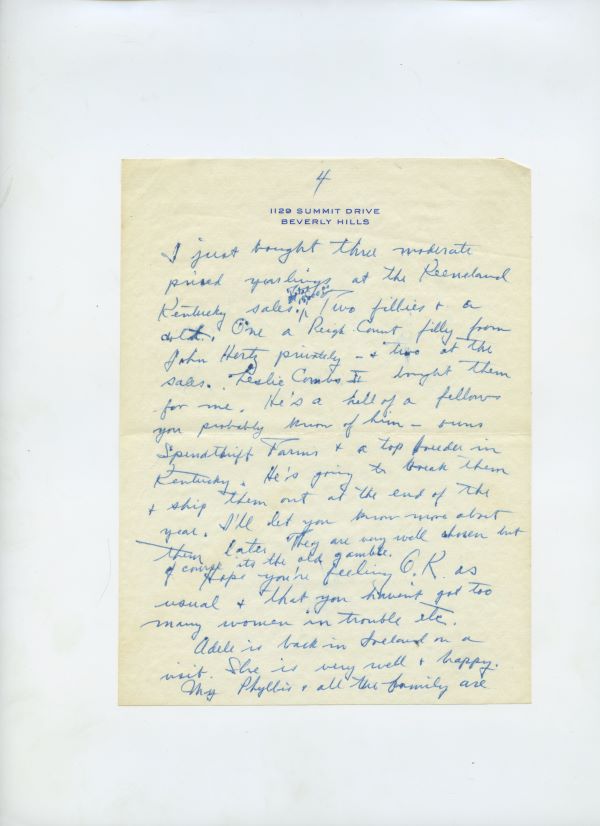 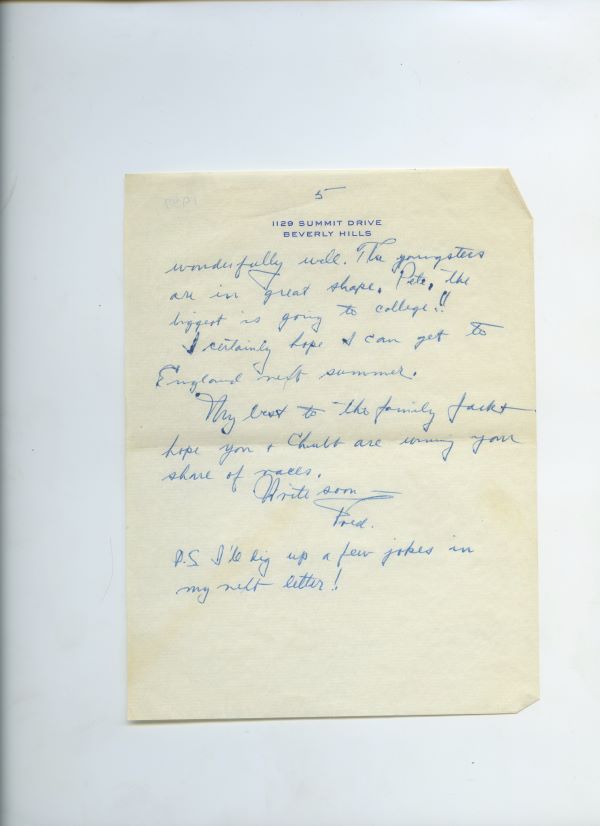 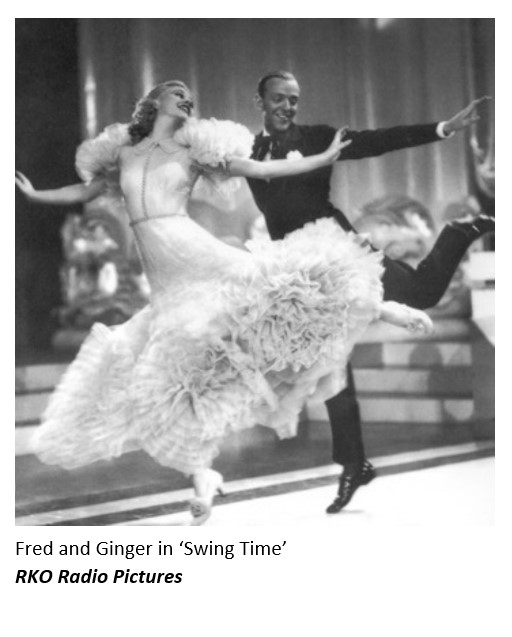 Have been wanting to write but you know what happens when I start on a picture.

We’ve had complications & Judy Garland had to retire from the picture on acct. of illness. I’m very sorry to lose her because she is great – but Ginger Rogers has been brought in to replace her. I haven’t worked with Ginger for 8 years & it’s a lot of work for her to get back to dancing again. I just did a hell of a good picture “Easter Parade” with Judy. It’s a big hit, I think the biggest I’ve ever had. Well – nuts with pictures I want to know about your horses. How is Delerium? Hope he has held up well this year

Have you any new ones? How many races have you won? My big gun Trip won a race at Santa Anita (not one of the big races) & then tailed off just at the wrong time. He didn’t like the track this year – it was loose and slower than ever before. The one race he did win was a crackerjack though. At Hollywood Park he hurt his leg in training & was out for the meeting. He’s been blistered and is now galloping & getting ready to leave for the Golden Gate at San Francisco where he won the big $75,000.00 last year.

He’s O.K. again I think. He never has taken a sore step but the slight filling showed just under his right knee in the back & I didn’t want to take any chances with him.

He looks fine & big and I guess this may be his last year of racing – or maybe next Santa Anita meeting. He goes to stud in Kentucky & is in demand. He’s won $240,000.00. My old plater Early Bird (sore legged old bastard) is game as hell & always gets in the money it seems. He won a nice race a few weeks ago at Hollywood Park with Longden up. My filly Over Anxious (3 yrs) has been in the money 8 out of 10 starts – 2nd, 3 times in a row but still hasn’t won a race.

She will though I think. We brought her as a wife for Trip anyway. She’s a lovely looking little thing (not too little) & beautifully bred. (By Questionnaire out of an Equipoise mare called Court Manners). I brought her from Jack Whitney’s Greentree Farms. I just bought three moderate priced yearlings at the Keeneland Kentucky sales, total $15,000.00. Two fillies & a colt. One a Reigh Count filly from John Hertz privately – & two at the sales. Leslie Combs II bought them for me. He’s a hell of a fellow – you probably know of him – runs Spendthrift Farms & a top breeder in Kentucky. He’s going to break them & ship them out at the end of the year. I’ll let you know more about them later. They are very well chosen but of course it’s the old gamble.

Hope you’re feeling O.K. as usual & that you haven’t got too many women in trouble etc.

Adele is back in Ireland on a visit. She is very well & happy.

My Phyllis & all the family are wonderfully well. The youngsters are in great shape. Pete, the biggest is going to college!!

I certainly hope I can get to England next summer.

My best to the family Jack & hope you & Chubb are winning your share of races.

P.S. I’ll dig up a few jokes in my next letter!