Hollywood Park in Los Angeles was a hugely popular racecourse. It was a hotspot for famous faces, including Bing Crosby, Barbara Stanwyck and Fred Astaire.

Tragically, a fire broke out in May 1949, causing $5 million worth of damage. It took just over a year to rebuild. While the refurbishment went ahead, Santa Anita Park in nearby Arcadia, California, took the ‘reins’ for the racing season.

Hollywood Park closed in December 2013. The site where the former racetrack once stood is now a residential area and sports complex. It is one of the locations for the 2028 Olympics. 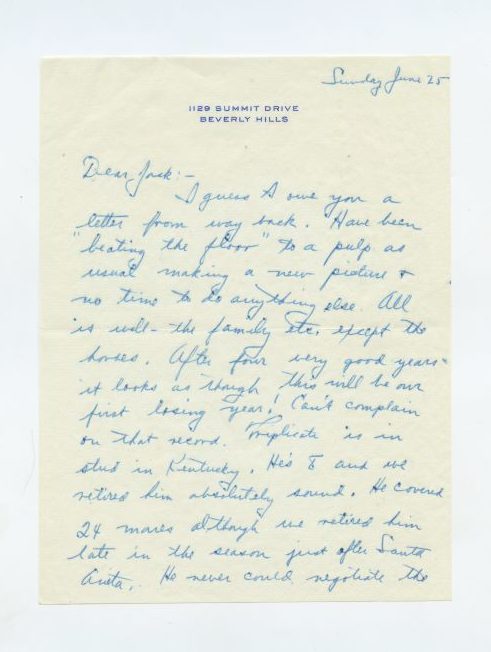 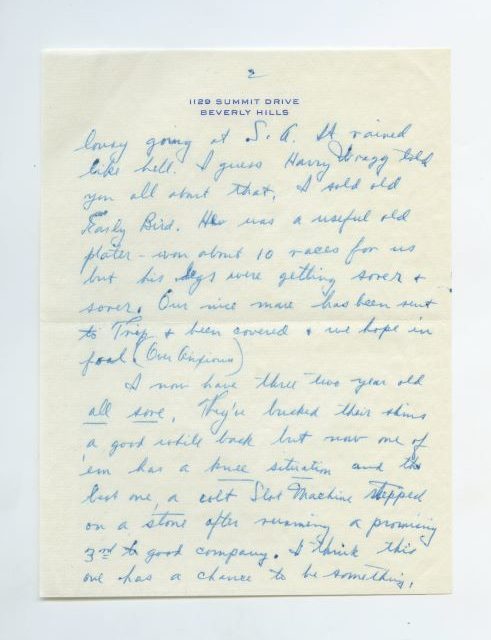 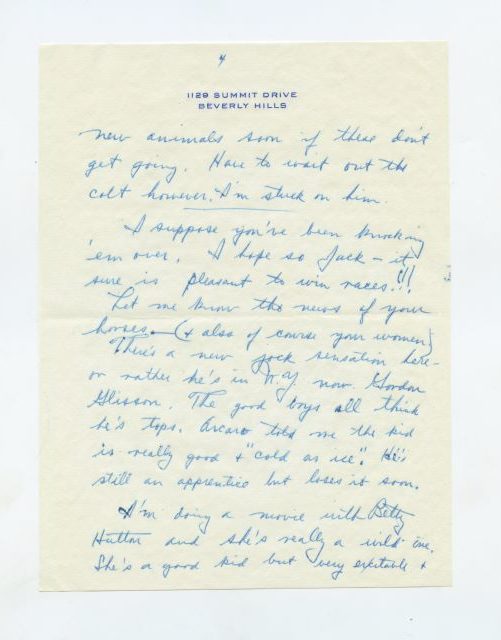 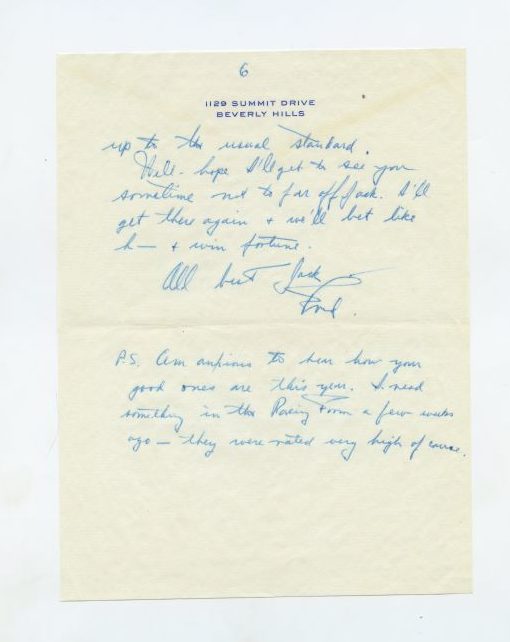 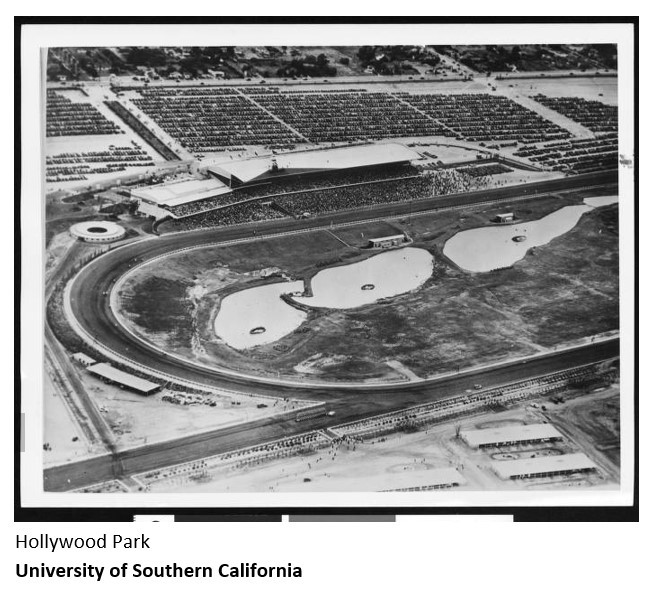 I guess I owe you a letter from way back. Have been “beating the floor” to a pulp as usual making a new picture & no time to do anything else. All is well – the family etc. except the horses. After four very good years it looks as though this will be our first losing year! Can’t complain on that record. Triplicate is in stud in Kentucky. He’s 8 and we retired him absolutely sound. He covered 24 mares although we retired him late in the season just after Santa Anita. He never could negotiate the lousy going at S.A. It rained like hell. I guess Harry Wragg told you all about that. I sold old Early Bird. He was a useful old plater – won about 10 races for us but his legs were getting sorer & sorer. Our nice mare has been sent to Trip & been covered & we hope in foal (Over Anxious).

I now have three two year old all sore. They’ve bucked their shins a good while back but now one of ‘em has a knee situation and the best one, a colt Slot Machine stepped on a stone after running a promising 3rd to good company. I think this one has a chance to be something when the distances stretch out. He’s a nice gray Jack & built like a rock as far as soundness is con-cerned. His stone bruise or whatever it is – is not serious I’m told only I can’t run him for some time of course. The other – a nice filly (on the small side) but can run. We had fired for ringbone and now she’s rid of that (for a while anyway) but she ran through a fence & really knocked herself out – so we have to wait for her too. She’s one of those “charmers” & acts so damn cute & cry all the time & bumps herself around. She’s nice natured however. Well – that’s the story. I’m digging for some new animals soon if these don’t get going. Have to wait out the colt however, I’m stuck on him.

I suppose you’ve been knocking ‘em over. I hope so Jack – it sure is pleasant to win races!!!

Let me know the news of your horses (and also of course your women).

There’s a new jock sensation here – or rather he’s in N.Y. now Gordon Glisson. The good boys all think he’s tops. Arcaro told me the kid is really good & “cold as ice”. He’s still an apprentice but loses it soon.

I’m doing a movie with Betty Hutton and she’s really a wild one. She’s a good kid but very excitable & when she gets confused or misses anything she’s trying to do, she comes out with anything – no matter who’s around. Its “Oh s**t!” all day long – and “Well F**k That” etc etc. We’ve just done a hell of a funny number that you’ll really like. This picture won’t be out for some time. The one “Barkleys of Broadway” with Ginger Rogers is a hell of a hit & that should hit London soon.

We had a terrible fire at Hollywood Park as you probably heard. The meeting transferred to Santa Anita is not so good at this time of year. It is hot as hell over there in summer. Business of course is big but not up to the usual standard.

Well – hope I’ll get to see you sometime not to far off Jack. I’ll get there again & we’ll bet like h- & win fortune.

P.S. Am anxious to hear how your good ones are this year. I read something in the Racing Form a few weeks ago – they were rated very high of course.